It has been over a year since I have been to Disney World. So much has changed since I have been: the hat was taken down at the Studios, Avatar was added (is that what it’s called?), Wishes was replaced, the Caribbean hotel got a refresh … I’m sure there’s more.

I have the itch though. Anyone who loves Disney knows, and has felt this itch. I want to go back home. Of course, I mean Disney World.

I thought I’d be back to work by now. We promised the kids, the first thing we would do when I was better is plan a trip to Disney World. We all know how that has turned out. Boo. Instead of wallow in misery, we’ll talk about my top 5 things to do at Disney World. Top 5 will be hard, because there is so much greatness there. Here we go:

1) Chip ‘N Dale’s Campfire Sing-A-Long — I think they have this every night? We’ve never stayed at Fort Wilderness, but we’ve gone to this “free” event there multiple times. There are a couple fire pits, and you can buy “kits” to roast s’mores (Make sure you take cash!!). Chip ‘n Dale come out with camp counsellors, and everyone sings! There is then an outdoor movie you can enjoy under the stars. I will mention that this is weather dependent. We have been there when they have had to cancel for weather. Bummer!!!

2) Eat at Boma, Enjoy pool area at Animal Kingdom Lodge — Boma restaurant is located inside the Animal Kingdom Lodge. It is rather expensive, but I am pretty sure it’s considered a moderately priced hotel. We eat there at dinner time. It is a buffet that has all the different flavors of Africa. It is absolutely delicious!! My kids did not like it … but they hate everything. Before (or after, if we are running late) our reservations, we go back to the pool area. There are a lot of “hidden Mickeys” back there, as well as many overlooks for animals on the savanna. It is very cool, and even the kids lived that part!! It’s a must for every trip. 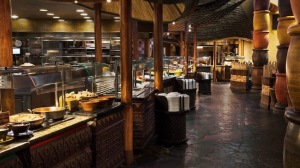 3) Used to be Wishes, but I imagine the new show is cool too. Of course, this is magical in the park, but watching it from the white sands of the Polynesian resort is amazing!! They turn off the lights outside, and play the music over the loud speaker. AMAZING!! And they have a lighted floating parade on the lagoon while the fireworks are going on. It is rather magical.

4) Splash Mountain — This requires a ticket to the Magic Kingdom park. This ride offers both a whimsical character story (Song of the South) and a thrill ride (the log-ride like hill at the end). It is so much fun! Word of advice: you will probably get wet! Plan for this. Also, this ride often has a LONG line. Fastpass it if you can!! Head there FIRST THING when the park opens, or hit it during Magic Hours if your eligible (and if you’re not eligible, you SHOULD BE STAYING ON PROPERTY).

5) Fantasmic — This show requires tickets to the Hollywood Studios. Get there EARLY for a good spot. Good spots are smack in the middle. Lower seats WILL get wet. This is the closing show at Hollywood Studios. It features Mickey Mouse and a movie scenes shown on spraying water. There are also canoes and a “parade” on the water. Be prepared for loud music, a gun battle, and brief fireworks at the end. So so magical. If you’re a sap like me, be prepared to tear up.

There are so so many more things to enjoy at Disney World! What are some of your favorite??